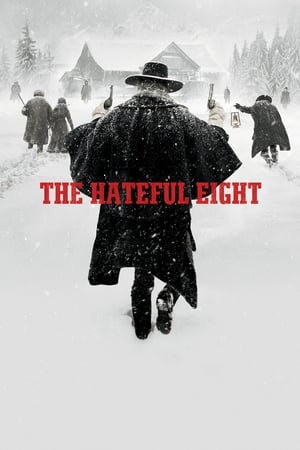 Overview: Bounty hunters seek shelter from a raging blizzard and get caught up in a plot of betrayal and deception.

I was fully prepared to hate The Hateful Eight. It's almost three hours long, it's a western themed film, and I really don't like Samuel L Jackson. That being said, this film is damn near perfect. Even though it takes quite a while for the movie to gain a good pace, I was never bored and as soon as it hits its stride, I was enthralled. The cast is outstanding. I still think Jackson is the weak link here, but he does occasionally act and not just recite the script. Jennifer Jason Leigh was nominated for an Emmy and a Golden Globe for her performance and I though she was great. The whole cast very good, but she was the best part. The story was intriguing and I loved how deep the characters are. I had very few issues with the film. A lot of the characters make decisions and they just let things happen that really don't feel realistic. I can forgive some of it because movie, but they really push it. The effects, mainly the blood and gore, are way over the top. I love seeing a head explode as much as the next guy, but it's almost as if Tarantino doesn't understand how bodies of guns work. I love the "Holy shit!" moment when a guy's head becomes a chunky red chowder, but every head shot doesn't deserve a total cranial annihilation. Again, because movie, I can let it go. It does look pretty damn cool, even if it's wildly overdone and unrealistic. The one thing that I can't forgive and really killed parts of the movie for me was the awful narration. It only happen two times, but it's so unnecessary and poorly done that it sticks out more than anything else, positive or negative. The actual voice over actor is bad, but the worst part is that it's essentially just a summary of scenes they don't show us. They don't match the tone of the rest of the movie and it's not like the actions they gloss over would be hard scenes to film. There are funny parts, but the movie is played very straight and all of a sudden the really hokey narrator chimes in to tell us what them Duke Boys were up to last episode. They feel out of place and the replace scenes that I would really like to see. The Hateful Eight exceeded my (admittedly low) expectations. It's a long movie, but even the slow part at the beginning which is 90% dialog (a good portion of which isn't even really necessary) kept my attention. It's an almost three hour commitment, but if you don't mind the nearly cartoonish violence, I'd say it's worth it.