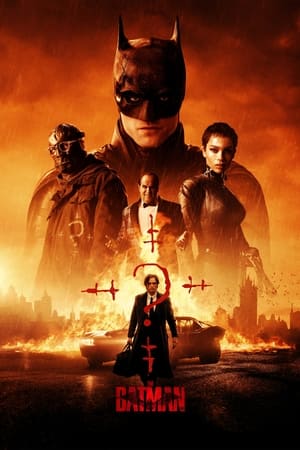 Overview: In his second year of fighting crime, Batman uncovers corruption in Gotham City that connects to his own family while facing a serial killer known as the Riddler.

Having to follow Nolan’s trilogy was a big ask, but clearly not from the guy (Matt Reeves) who allegedly called Chris Nolan to proclaim that his new version of the Batman is superlative. The wait is over. I can honestly tell you without a shadow of a doubt that Tim Burton’s Batman is leagues superior to this rubbish they are forcing the new generation of kids to swallow and at three hours long? No, thank you. This version has no identity as a film. It feels like a rehash of Burton and Nolan’s without the style, substance and wonderful writing that entertains the audience and make them care about the characters and where the story is headed. I was bored with this one, waiting for the excitement that was sorely missing in this Batman. And each time, I thought it was done. Nope. Suffice to say, the story dragged. One of the biggest problem with this (aside from the horrible script) is that it just wasn’t exciting and the mystery was pedestrian and the visuals and story progressions were similar to previous Batman outing so, what does that leave you? The actors. Again, with horrible script and a barely there sexual chemistry between Pattinson and Kravitz you can’t help but compare that to Keaton and Pfifer’s sizzling chemistry. That’s what a good script can get you! Hard pass on this outing. The cinematography was beautiful.

While it's not too far from the Nolan trilogy, this one trades the over the top action for a much slower story with flashes of detective work. The cinematography is great and I loved the use of lighting, but this really needed to be rated R. To make a big deal about Batman pounding some dude's face into soup and having there be zero blood really undercuts what they're trying to say. It's not as violent as the Nolan movies, but it's darker and it really needed some realism in the fight scenes at least. Pattinson does great with what he's given, but most of the characters feel under-written. I don't know how we can have a nearly three hour movie and do so little for the characters. We get a lot of plot and I liked watching it unfold, but they take some real liberties with the source material that raise a lot of questions that they don't address. There were some bad effects (mainly during Batman's "flight") but they were mostly alright. This was a solid first entry, but if we're going to do "dark and gritty" Batman again, it needs to stand out more from the Nolan movies. Make the violence violent and spend more time developing the detective work, this time it felt like we saw the steps, but little of the process.