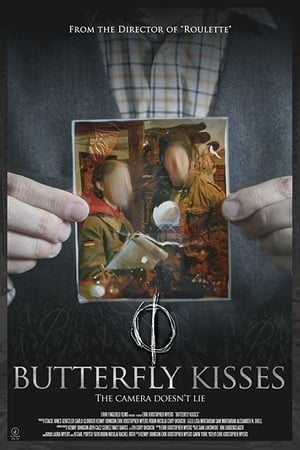 Overview: A filmmaker discovers a box of video tapes depicting two students' disturbing film project featuring a local horror legend, The Peeping Tom. As he sets out to prove this story is real and release it as a work of his own, he loses himself and the film crew following him into his project.

Butterfly Kisses really wants to be a Lake Mungo or Blair Witch Project, where you have super fans digging through the lore and re-watching the film and breaking it down frame-by-frame, looking for hidden things, but it's not. Butterfly Kisses is a faux-documentary that follows a guy making his own documentary about a box of tapes his mother-in-law found under their water-heater. The tapes are what would have been a student film by two college students investigating the local legend of Peeping Tom AKA Blink Man who allegedly appears if you stare town a certain tunnel for an hour without blinking and then gets closer to you every time you blink until you can literally feel his eyelashes on your face (colloquially known as butterfly kisses). It's a very meta-movie which does help how serious they play it, although they definitely play it too serious, crediting made-up people in the credits and filling out the IMDB page with stuff like listing Gavin York, the main character, as playing himself even though he is played by Seth Adam Kallick (it has since been corrected with real information). Even though it is clearly a movie and none of this is real, they really want you to question whether or not it's authentic. The nature of how they structure the story by having a team documenting a man documenting another group of people via found footage allows them to explain away the a lot of the many, many plot holes and cliches of horror movies. The problem is the same that all these meta things have, just because you point out that what you are doing is bad, doesn't make it less bad. When Deadpool says "Boy isn't that a cliche you've seen a million times" it doesn't make it less of an annoying cliche. When the Simpsons video game makes fun of bad platforming mechanics it doesn't excuse the game having bad platforming mechanics. Butterfly Kisses is full of times where they have a terrible effect or a plot element that makes no sense and they have a skeptic character point it out and Gavin craps all over them saying "No, it's all real. How could they fake that?" It gets so convoluted. The entire movie makes no sense. I guess at times it feels like this is what a real documentary would look like, with interviews inter-spliced with footage from the tapes, but the acting is absolutely awful most of the time. They do get some real people to film fake interviews (one of the Blair Witch Project directors and the author of those Weird Pennsylvania kind of books) but they feel forced. Not for one second could you convince me that this is a real documentary and the movie almost seems to beg you to. Butterfly Kisses is a sad Frankenstein's monster of a movie. The only original bit is how many layers of film there are, but having the three layers only muddies the narrative and confuses the audience. Are the tapes Gavin found real or fake? Does Gavin really believe that the tapes are reals and is actually trying to make a real documentary about them or is he trying to pull a Blair Witch and make a horror movie that is played as real found footage? Is Butterfly Kisses a real documentary or is it a faux-documentary that they are trying to fool people into thinking is real? In the end, I don't care. I'm never going to go check out the websites the film mentions and I'll never re-watch it looking for Peeping Tom is the background. There are no compelling characters an the acting is bad and there is nothing novel about this film. Found footage is old news and The Blair Witch Project already exists. Peeping Tom has a little bit of promise, but the movie is not actually about Peeping Tom; they don't investigate who/what he is, they don't look into his mythology, an they only give us two or three minutes of interviews about people having experiences with Peeping Tom at the beginning. Peeping Tom himself i basically a rip-off of the weeping angels from Dr. Who. The movie is really just a convoluted movie about a documentary about a documentary about a box of tapes of college students investigating an urban legend and none if it is worth your time. Gavin is not a relatable character and even tough we get four minutes of character building for him, I couldn't care any less. Even is you look exclusively at its value as a horror movie, there is nothing scary here. There is one terrible jump scare that looks absolutely terrible, but the rest of the movie is just a boring faux-doc.