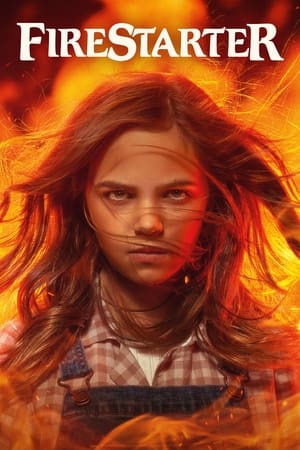 Overview: For more than a decade, parents Andy and Vicky have been on the run, desperate to hide their daughter Charlie from a shadowy federal agency that wants to harness her unprecedented gift for creating fire into a weapon of mass destruction. Andy has taught Charlie how to defuse her power, which is triggered by anger or pain. But as Charlie turns 11, the fire becomes harder and harder to control. After an incident reveals the family's location, a mysterious operative is deployed to hunt down the family and seize Charlie once and for all. Charlie has other plans.

The book wasn't great, but it had a lot of potential. The original movie was terrible, but it was an adaptation of the book and just needed some tweaking to be tolerable. This new Firestarter isn't really an adaptation of the book. This feels like someone was listening to two strangers talk about the book in the opposite corner of a Starbucks and left five minutes into their conversation. There are very few pieces of Firestarter here and what they do use, they use terribly. They change so much that this is more "inspired by" the book than any real adaptation. Every single character is neutered (minus the mom who has a lot more power in this version for no real reason) with Rainbird being totally stripped of all his scenes and The Shop stuff being all but eliminated and replaced with a very generic version. At a certain point, it felt like they were changing things just to change them (like Andrew McGee not being his real name or giving Rainbird powers). I don't just want to rant about how terrible this is compared to the book, because this film is plenty bad in a vacuum. The acting is terrible, the effects look awful and easily the most horrific part of this "horror" film is the pacing. This movie is almost half an hour shorter than the original, but this one feels twice as long. There are no big action scenes, this new story is very generic, and the characters are super-underdeveloped. I never bought Efron as a father and I never bought the girl as a human. I'm sure they are both doing the best that they can with this terrible script, but it was all terrible. For some reason, every scene in their house looks like the room is filled with smoke, even when there had been no fires in the house for years. This isn't supposed to be a smokey within the context of the movie, so I guess it's a stylistic choice that just makes things harder to see. The score was okay, but that is the only credit I can give it. This movie is so bland and and boring. There are so many great scenes in the book that they could have plugged in, but instead we just plug along slowly towards a very disappointing ending. This was a terrible film if we treat it as an individual film, but as an adaption of the book and a reboot of the original movie, this is so much worse. Firestarter is a C+ book and the 1984 movie is a D+ movie, but this one is a solid F. There is nothing better here other than the camera quality. They eliminated all the best scenes and took all of the character out of the characters. There is nothing here that validates this movie existing.