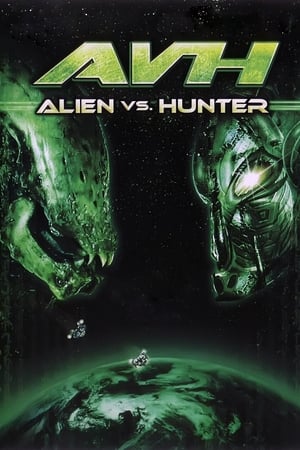 I knew exactly the kind of "movie" I was getting when "The Asylum" came across my screen. AVH is a little different than the usual Asylum mockbuster, but the quality is just the same. Alien Vs Predator was kind of a culmination; we knew who the Xenomorphs were and we were familiar with the Predators. AVH just assumes that we are going to care about pitting their Alien against Hunter. Guess what, it's an Asylum film, so there is no real characterization for anyone, the acting is terrible, the CGI is just terrible, the action is either just off screen or shot from so close up that we can't really see what is happening. There is a unique twist in the story, but the rest of the story is garbage. The writers seem to forget were things are, where the characters are, and that every town has a huge system of sewer tunnels with 15 foot tall ceilings filled with tons of conduit and no water. Even if all of this was good, what really matters in a movie like this is how awesome the Alien, the Hunter, and the action are. As a spoiler to no one familiar with The Asylum, these things are awful. The alien is a man in an okay looking costume when we see him close up, but from farther away, they CGI it, because it's like a centaur, except replace the horse part with a giant spider and the top part with a vaguely Xenomorph body. It looks really bad (no surprise) and looks hilarious. The Hunter looks like a robot with one eye and a rice patty hat. All of these complaints pale in comparison to the absolute worst part of this movie, the color grading. I guess the really didn't want to film at night, so night time scenes are colored blue. I spent a long time thinking that maybe there were giant blueish spotlights, but no, they clearly just color corrected the scene in make everything look blue. They do the same with red and yellow in other scenes, but the blue is the worst. Could they not figure out how to light the sets or did they not know that if you wait a few hours, the sun goes down and it gets dark. It could be a budget thing, because it is also clear that they don't have more than one microphone (there are scenes where one character is talking, but we can't hear them because they are too far back) and they seem to avoid redoing scenes at all costs (characters flub lines and talk incomprehensibly and they leave it as is, but then again there are an equal number of scenes were 100% of the dialog is poorly disguised ADR). AVH is almost a "good bad" movie, but I refuse to believe that The Asylum makes movies that they think are good. I hate movies that are purposefully made to be bad movies. Birdemic and The Incredible Bulk are absolute garbage because they were never made to be real films; they were made with the single purpose of creating a terrible movie. AVH falls in that category. Beyond the last 2 minutes, this movie is pure trash.