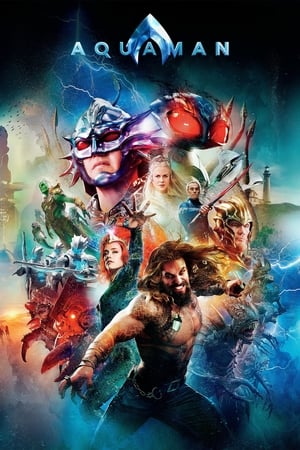 James Wan did a good job. The end. Everything else is just so wrong. This is the only DCU movie other than Wonder Woman (and even many of the MCU movies) that actually feels like it is was made by one director with a vision and heart. The cinematography is pretty good and there were quite a few scenes that were creatively shot. We even get James Wan signature shots and elements all over the place and his horror movie background is capitalized on multiple times. Also, the CGI is pretty sometimes and we get some legitimately beautiful and creative shots. Willem Dafoe is great (of course) and Patrick Wilson is okay (considering what they gave him to work with). Kay? I said some nice things. Aquaman is bad. It's a fun movie, but it's so bad. It's one of those movies that expects you to say, "Yeah, okay." and just go along with whatever they are saying or doing and never stop to think about it. Momoa and Amber Heard have no chemistry, but they sure expect you to believe it. The movie is bloated with a trilogy's worth of plots that are essentially just a combination of other movies (I won't spoil any plot details, but you can't help but notice how liberally they "borrow" from other classic films). The characters all make decisions that make no sense and only make things more difficult for themselves because the plot needs them to. For a two and a half hour movie, it went by pretty quick and I was never bored, but I was almost always at some level of frustration. It is very clear that Aquaman is trying to do way more than one film can do and their only priority was to be "epic". There are so many fight scenes, most of which don't advance the plot any and actually deflate any tension they've built. They don't build up to fight scenes, they just throw them in for more action. It's even worse because the action scenes are where the CGI is at its worst. None of the CGI look real, ever. It looks cool or artistic in establishing shots, but there wasn't a single sea creature that looked realistic. They over do the CGI to the point where they clearly use a green screen when a character is standing on a dock. They have an actual lighthouse that they use, but the green screen the water in t he background when the dude stands on the dock. Aside from those I mentioned before, all the acting is terrible. Momoa is essentially a surfer bro. I prefer the normal iteration of Arthur Curry, but Polynesian Aquaman is a great idea, they just give Momoa the worst script to work with. He is the comic relief in the film, but nothing he says is ever funny; it's just dumb. Amber Heard is awful. Somehow, they convinced Nicole Kidman to be in Aquaman. They must have had one of her kids held for ransom until she did this film. I guess she does the best she can with the terrible, stilted dialog she's given, but it's almost painful to watch. The plot goes way too fast and is riddled with plot holes and "what about"'s. The score is super manipulative because the movie is devoid of emotion. They have to play a plucky sitcom song so you know this scene is adventure. They play a sappy romantic song so you know these two like each other. Aquaman's action scenes have a signature score that is straight out of a horror movie, where the characters are huddled against a wall and the storm blows the front door open to reveal the big, hulking serial killer. BWA...BWA...BWA! The tone of Aquaman isn't consistent enough to know how seriously they are taking the story. There are big, dumb, unrealistic comic book scenes that make me think they are going for a cheesy Marvel movie, but there are also scenes that feel like they are falling back to the Zach Snyder super serious, over dramatic, dark DC movies. There are scenes that feel like they are from a horror movie, right after a scene where characters are flying through the desert while a Pitbull song is played. Aquaman is a messy amalgamation of contrasting pieces. Again, I had fun watching Aquaman and I'd recommend it to fans of what Marvel is doing now, but part of the fun is watching all the terrible mistakes they make with the script, the plot, the CGI, the terrible casting, the array pacing, and the sheer stupidity of the characters. This is a big, dumb action movie, that if it wasn't called Aquaman, no one would have ever dared to give a theatrical release. This movie is made for 13 year-old boys. It's just crammed full of stuff and its so fast in hopes that you won't try to use your brain. It's a huge step away from the Zack Snyder films, but it's also not much of a step forward towards a film like Guardians of the Galaxy or Ragnarok. This is Skyscraper or the Point Break remake. It's unfunny, cliche, and terribly written, but it's a barrage of color and explosions that just may be able to distract you from that.