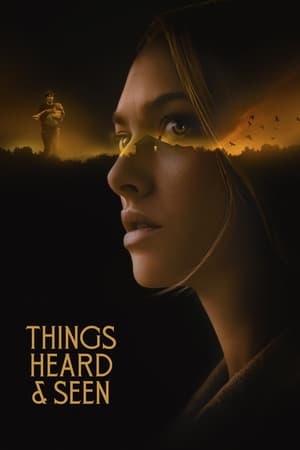 Things Heard & Seen starts off with very What Lies Beneath (and maybe a little Sinister) vibes and I was on board. It is a poorly paced movie, with very long chunks were little happens and there are a lot of plot choices that feel cliche, but I was enjoying myself for the most part. I've never really been an Amanda Seyfried fan, but she was pretty solid here (James Norton was touch and go) and I didn't really have much of an issue with the acting overall. The cinematography was boring, but not intrusively so and the score was fine. Up until the last 20 or so minutes, this was a solid C+ movie; it's entertaining, but it needed some plot retooling and a little more polish from the director, but it was fine. The last 20 minutes kind of ruin it. Throughout the film, there are some goofy effects, spotty execution and explanation of the supernatural elements, and some pretty jarring tone shifts, but the ending combines all three and cranks it up to 100. I was content with the movie until we just fly off the rails with a very confusing, hokey, and poorly executed ending. I feel like everyone watching this movie can think of a better way to end it; heck, just eliminate the last 15 minutes and I'd be satisfied. Nothing here is well done enough to make up for that ending. It's a C+ movie with a D- ending. It feels like there is a message here that they are trying to push in lieu of working harder o the story, but for the life of me I can't decipher what they are trying to say; it's all so muddled. Things Heard & Seen is probably okay for a movie that was just plopped onto Netflix with little fanfare, but this would have been a box office bomb or a straight-to-DVD film otherwise. It's a bumpy, but not overall unpleasant, ride that unfortunately ends in a four car pile up.