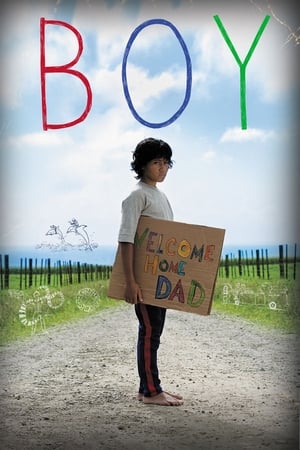 Overview: It's 1984, and Michael Jackson is king - even in Waihau Bay, New Zealand. Here we meet Boy, an 11-year-old who lives on a farm with his gran, a goat, and his younger brother, Rocky (who thinks he has magic powers). Shortly after Gran leaves for a week, Boy's father, Alamein, appears out of the blue. Having imagined a heroic version of his father during his absence, Boy comes face to face with the real version-an incompetent hoodlum who has returned to find a bag of money he buried years before.

Although his humor doesn't always line up with my tastes, I love how well Taika Waititi can hit those emotional notes and make a cute, charming movie without ever coming across as overly sentimental or saccharine. Boy does so much of the important things right that it's an easy recommendation for most people, but it's not quite a polished as, say Hunt for the Wilderpeople. The acting is 95% perfect (a few over the cousins and the brother aren't great) and I really found myself rooting for and sympathizing with James Rolleston' character. Boy touches on a lot of heavy things but it does them with such grace that it's almost forgivable how much of it they hit with kid gloves. Really, my only issue is that the story as a whole is kind of lackluster and could have used some fleshing out. There are lots of plot threads that just don't get enough attention and the ending is unsatisfying considering the build up, which does kind of grow and grow and explode but then barely left a mark. Boy is an enjoyable movie that, although it never really made me laugh, is full of heart and personality.