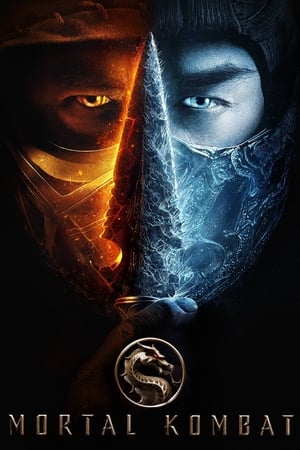 Overview: Washed-up MMA fighter Cole Young, unaware of his heritage, and hunted by Emperor Shang Tsung's best warrior, Sub-Zero, seeks out and trains with Earth's greatest champions as he prepares to stand against the enemies of Outworld in a high stakes battle for the universe.

Mortal Kombat kind of feels like if you gave Asylum a big budget with the caveat that they have to really try, no Alien Vs Hunter or Sharknado, they have to make a real move. Let's start with the cast. Josh Lawson (in a huge departure from his role as Tate in Superstore) is the highlight; he is what DC tried to do with Captain Boomerang in Suicide Squad. His portrayal of Kano isn't perfect, but he steals every scene he is in. This movie tries comedy a lot and the only time it ever works is when Kano is talking, only about half of his stuff lands, but he was the only character that had humor that worked. Really, Kano is the only character that I believed in at all. Our main character is pretty bland and his acting isn't great, but he'd be passable is this movie wasn't trying to be so serious. Liu Kang, played by a clone of Micheal Jackson, is easily the worst character here. Most of the other cast members do a pretty bad job, but he's the worst. It's like if you pulled a character out of the Star Wars prequels where no one ever had any emotion in their lines and their faces were blank the entire time. Scorpion and Sub-Zero are great, but they don't feel right when we move to current day. I was all about it when we were doing feudal Japan stuff in the beginning, but seeing them in a sad MMA gym just didn't click for me. The plot does a lot of that kind of thing, though, with most scenes just not feeling quite right. The main story line is barely half-baked and for a movie called Mortal Kombat, it sure doesn't focus too much on the actual Mortal Kombat event. It just kind of looms in the background, but is never really realized. We focus way too much on Cole Young and he's one of the least interesting parts. I get that they are going for a much more gritty and realistic tone than the previous iteration, but you can't tell me this is a serious movie and then make everything so goofy. 1995 Mortal Kombat was very stupid, but it was campy and charming. 2021 Mortal Kombat feels like we're watching something that needed another six months of production. The CGI is pretty awful in both, but in 1995 it was endearing, in 2021 it's distracting to watch Goro look like you lifted him right from Mortal Kombat: Deadly Alliance; it looks really bad. With a movie like this, all you really need to deliver to get a passing grade is kick-ass fight scenes and Mortal Kombat delivers an appetizer. There are a few really cool moments in individual fights, but there wasn't one entire fight that left me satisfied. As Chris Stuckman put it in his review, it feels like a super hero movie where these guys are just wailing on each other and none if it seems to hurt. 90% of the time, when these people get slashed or stabbed or have giant boulders thrown at them, it's just a minor inconvenience. I appreciate that they used enough blood to earn that R Rating, but it's used all wrong (and in terrible CGI most of the time). A guy will get slashed and now there is blood flying out, but he doesn't react or move any different than he did before. All of the fights seem pretty random (random pairings in random locations) and none of them feel like they have any real weight other than Scorpion and Sub-Zero. All this is made even worse with the ending that basically rendered the whole movie pointless. I don't want to spoil it, but by half way through the movie, I'm wondering if they had plans for a sequel, because they are making some real big, universe altering decisions that would ruin any chance for a sequel anyone would want to see and then in the last fifteen minutes, they just wave their magic wand over the movie and I'm like "Oh, I see...... That's really stupid". Am I expecting too much out of a Mortal Kombat movie? A lot of people would probably say yes, but even if I focused on what specific things would I want out of a Mortal Kombat movie and but aside everything else (acting, cgi, story, score) I'm still underwhelmed. I don't think the fight scenes are that great and the fan service moments didn't enhance it for me, they only broke the immersion as they were so forced. I got to see a few of the characters that I'd grown to love in the video games, but they felt like cheap versions of what I'm used to. Again, maybe I'm wrong to knock the movie because I wanted to see Sub-Sero be more blue, Mileena to wear her mask and use her Sai more, and for wanting Goro to look like a badass and not a claymation figure. Even if I was only going to rate this as a Mortal Kombat movie, it just isn't what "my Mortal Kombat" is. There are little bits that I enjoy, but they are dragged down by a bad script, awful pacing, an under developed story with underdeveloped characters, terrible CGI, and underwhelming fights. Say what you will about the 90's films, but they were at least fun and sometimes kind of charming. I'll take campy Mortal Kombat over this any day.