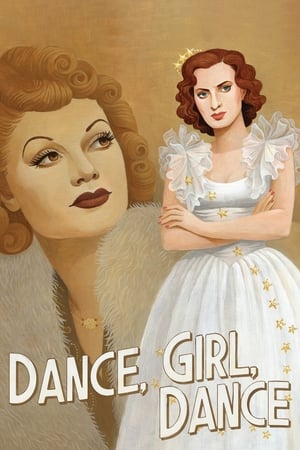 "Maybe there's lots of things you haven't seen", says Lucille Ball's character to Louis Hayward's a mere five minutes into "Dance, Girl, Dance". Imagine how saucy and shocking this line would have been in 1940! Ball delivers it with an artless directness, a harbinger of the many role reversals in this gem of a film from the most prolific female director in Hollywood: Dorothy Arzner. Three years later, she directed her last film and walked away from Hollywood on her own terms. Nearly 80 years have passed and apparently no female director in Hollywood has equalled her output. [Insert social commentary here.] Thanks to The Criterion Collection's Blu-ray release of Ms. Arzner's (as her ex-pupil Francis Ford Coppola refers to her), we can enjoy one of her best films. Ball definitely steals the show from Maureen O'Hara, who plays the straight-laced role of a rather uncompromising young woman who just wants to dance. The fates of the two women are intertwined, spanning men and money, and things in between. They have a complex, multi-faceted relationship that could very well resonate with two people who are best friends or even sisters. Laughs are aplenty but not at the expense of plot or characterization. Despite the passage of time, this is an enjoyable film that gives us a view into a not-so-distant past. "Maybe," is the reply given by Hayward's character to Ball's baiting line, "Maybe there's lots of things you haven't seen". That would be a definite yes for me, including the other films of Dorothy Arzner. We get an introduction to this remarkable trailblazer, who wanted to be referred to only as a "director" (no qualifiers required), in the supplements including an interview with Coppola. I wonder if his daughter, Sofia, recognizes Arzner as her directorial grandmother. What is most remarkable is how none of the female characters are weak or won't speak their minds as a matter of course. You just didn't see that back in the day, or even in some films of today.