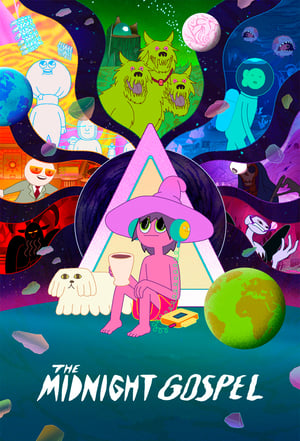 The Midnight Gospel is literally just re-spliced podcasts with a few lines of newly recorded dialog that play while an entirely unrelated lazy animation plays. They tell you the premise is something similar to the Interdementional Cable episodes of Rick & Morty, where our main character picks a different world simulation to join. I love the idea, but as soon as we join the new world, they start a "data-cast" and start talking about pseudo-intellectual crap that has absolutely nothing to do with what we are seeing going on. The first episode has the main character talking to Dr. Drew about drugs and meditation while fighting of a zombie apocalypse. You almost have to review the visual and audio elements separately. The audio is taken from Duncan Trussell's podcast and the add in a few lines to mention what is happening in the episode, but 98% is the most pretentious and inane conversations I've ever heard. It's two people who know nothing stroking each other's egos about stuff they heard in a Psych 101 class and didn't entirely understand. Do you want to listen to potheads talk about how cool drugs are, magic, Buddhism, and transcendentalism? I sure don't. The actual visuals often look like beautiful black light posters you'd find in the back of a Spencer's store, but they aren't animated properly. The animation is so rough and jumpy that it feels like they need three or four times as many frames to smooth it out. The Midnight Gospels thinks that it is a super deep philosophy discussion, but it's really just a #Deep rant between two stoned High School Freshmen in their mom's basement. I wanted Interdemensional Cable animated by the Adventure Time guy and this is none of those things.